Is your antenna system in good condition?

Accent Antennas can help you and they’re just a phone call away . Please make sure all the cross pieces on your antenna are intact and not corroded. Make sure any plastic junction boxes on the antenna are not cracked – these units are easily affected by moisture.

Also check the TV antenna lead and antenna connections at either end for cracks in the plastic covering. Antenna connections are the most likely places for damage to occur, and are simple to replace. Again, moisture can affect connections, and affect signal quality

Do you have the correct antenna?

Outdoor roof-mounted TV antennas receive a stronger signal and therefore provide better reception than indoor antennas. Electrical wiring, wall insulation and even people moving around a room can cause interference to the signal received by indoor antennas

Manly Beach is a beach situated among the Northern Beaches of Sydney, Australia. From north to south, the three main sections are Queenscliff, North Steyne, and South Steyne. 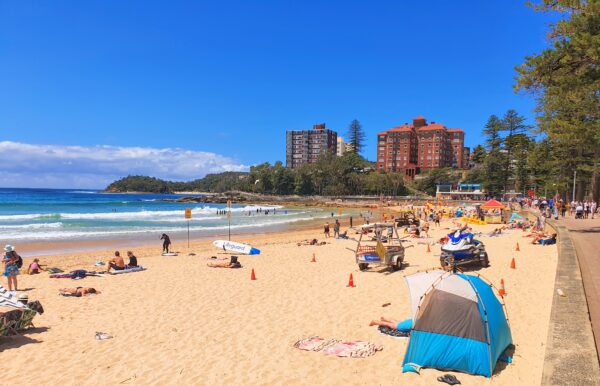 Manly Beach circa 1900
Within walking distance of Manly Beach along the oceanway is Fairy Bower and Shelley Beach. There are shops, restaurants, night clubs, and dive bars in town.
The beach was named by Capt. Arthur Phillip for the indigenous people living there. He wrote about them, “Their confidence and manly behaviour made me give the name of Manly Cove to this place”.
Manly Council Lifeguards operate a year-round service at South Steyne, and operate from October to April at North Steyne and Queenscliff. Volunteer Life Savers also patrol on weekends and public holiday between October and May.

A Manly Beach sunset
Travelling to Manly from Sydney’s main ferry terminal, Circular Quay, takes 30 minutes by ferry. The Corso, a pedestrian plaza and one of Manly’s main streets for shopping and dining, runs from the ferry wharf and harbour beach, across the peninsula to Manly Beach, where it marks the boundary between North Steyne and South Steyne.

The suburbs of the Northern Beaches district within Warringah Council are :

The suburbs of the Northern Beaches district within Manly Council are :

The suburbs of the Northern Beaches district within Pittwater Council are :